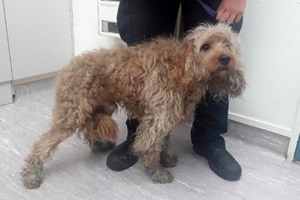 An Auckland woman was sentenced in the North Shore district court yesterday after being found guilty of contravening a previous court order. She was sentenced to a twelve-month supervision period and must complete any counselling as directed by her Probation Officer. She was also sentenced to 80 hours community service, ordered to pay SPCA $6,561.67 has been disqualified from owning animals for ten years.

She had previously been prosecuted by SPCA and disqualified from owning animals for three years in 2016, after being convicted of four charges under the Animal Welfare Act relating to two dogs and two cats in her care.

The case began in January 2017 when SPCA inspectors received information that the offender was housing an animal, despite being disqualified from owning animals. SPCA Inspectors visited her property and heard animal sounds coming from inside her garage, but were not able to see into it. They left a Notice of Entry on the door requesting urgent contact.

When she failed to make contact, SPCA followed up with a search warrant. A locksmith was used to gain entry to the house as she refused to open the door. SPCA Inspectors seized two dogs, a Spoodle named Sacha, and a Collie named Corinna, both with matted hair.

A veterinarian assessed the dogs as having been confined indoors in a hoarding type environment for long periods of time.

Under the care of SPCA, both dogs received care, lengthy rehabilitation, extensive training, and were rehomed into loving families.

SPCA believes that the offender had acted deceitfully by using aliases in order to purchase the dogs, as purchase information and Auckland Council Dog registration records showed variations of her name.

“SPCA had requested a disqualification period of twenty years in this case. We know that traditional means of punishment are insufficient to stop animal hoarding as there is an underlying mental health issue,” says Andrea Midgen, SPCA CEO.

“Having the courts impose counselling in this case is helpful as this will hopefully lead to changed behaviour.”

SPCA hopes that in the future it can not only prevent harm for at-risk animals but also create effective strategies to help offenders with mental health issues.

“We are pleased the dogs were rehabilitated and are now happy and healthy in their new homes.

Dealing with animal hoarding is traditionally one of our most challenging type of offences, so a sentence with mandatory counselling is a good outcome.”