Register
Home  /  About  /  News  /  Inspiring the minds of all Kiwi children

Inspiring the minds of all Kiwi children 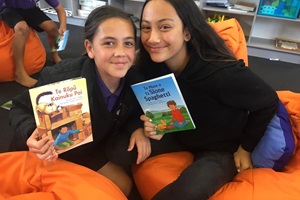 It’s morning tea at Te Kura Kaupapa Maori o Otara and the children are playing tag in the playground. Despite it being term 4, energy levels are high because today is different. A film crew has arrived, accompanied by three SPCA rescue rabbits, to talk to a group of Year 4 and 5 students about something exciting to be featured on TV news.

Just a few days earlier, the school received te reo Maori copies of SPCA’s Learn-to-Read Storybooks, and the reporters want to hear their thoughts on the real-life animal rescue stories. One girl asks to read ‘Sam and Charlie love pudding’ because it reminds her of her own cat, and one of the boys asks the kaiako (teacher) to read ‘Guzzler does the job’ because pigs are his favourite animal.

The students may have their favourite stories, but the whole class give a resounding thumbs-up to all the books as they settle down to get stuck into them. The air fills with chatter and excitement, as the students take it in turns to cuddle rescue rabbitsAlfie, Otis and Eddie, and read passages from the stories aloud. “We were thrilled to receive the books and can’t wait to start using them in class,” says principal Marama Hune, who is eager to discuss how these new translated resources can help the school. “I went home last night and said to my partner, ‘These books are so awesome’. Now I can’t wait to plan new modules around them.”

The storybooks are the newest release from SPCA’s free in-school Education Programme, which successfully launched in 2016 and has been enjoyed and utilised by thousands of school children and teachers across the country. Its aim? To improve animal welfare by educating and changing the minds and hearts of the next generation. The programme encompasses a wide range of resources readily available for teachers and children. This includes an extensive online teachers’ portal, an engaging kids’ portal and two series of Learn-to-Read-Storybooks.

“That’s why both series have now been translated into four more languages: te reo Maori, Samoan, Tongan and Mandarin – four of the most common languages spoken in New Zealand. We hope to translate more of our resources into additional languages in the future, should funding allow.”

In October, 25,992 printed te reo Maori books were sent to more than 2000 primary schools free of charge, and gagana Samoa, lea faka Tonga and Mandarin Chinese editions are available to download from SPCA’s online teachers’ portal. The hope is that children whose first language is not English, or those who are learning an additional language, can still use the books to develop their literacy skills while learning important lessons about animal welfare. “When used alongside the English versions of each reader, our translated versions will help support children’s learning of additional languages, whilst nurturing their first language,” says Nicole.

Principal Marama Hune (or Whaea Marama, as she’s known to the children) has worked in the education sector for over 12 years and says goodquality te reo Maori resources for the classroom can be hard to come by.

Now, Marama plans to use the storybooks as inspiration for a new topic on animal care and welfare, perhaps starting with the ‘five freedoms’ or ‘cost of having a pet’ units from the online teachers’ portal. There are 12 books – six from each series – which can be used in a range of ways for the teachers and students.

The stories have been carefully written to not only align with the New Zealand curriculum, but also nurture children’s empathy and compassion for animals by using tangible stories. “As soon as I saw these SPCA resources I thought ‘wow’. From reading the books, it’s clear the language isn’t too hard for children to understand because it’s based around relatable stories,” Marama says. “By having them in four more languages, I am sure many schools, just like ours, who teach bilingual children can benefit a lot from them.”

After chatting in-depth about the stories with both students and teachers, the camera crew pack away their equipment and remind them to tune into the news that night. The storybooks have been a hit with the children at the Kura Kaupapa, as has the visit from the SPCA rescue rabbits.

One girl, who began the morning scared of small animals, now says she adores rabbits after hearing about how to care for them. As she shares her knowledge with a fellow classmate, Whaea Marama explains how this topic will encourage the students to always show compassion towards animals, not only at home, but also in the community. “We always teach manaakitanga (kindness), but it is usually towards people. Now we can use these resources to focus that on animals too,” says Marama. “It comes quite natural to our tamariki (children) to be interested in animals, and part of animal welfare is having respect for any animals they come across. Making those links for them is going to be so much easier with the use of these books.”